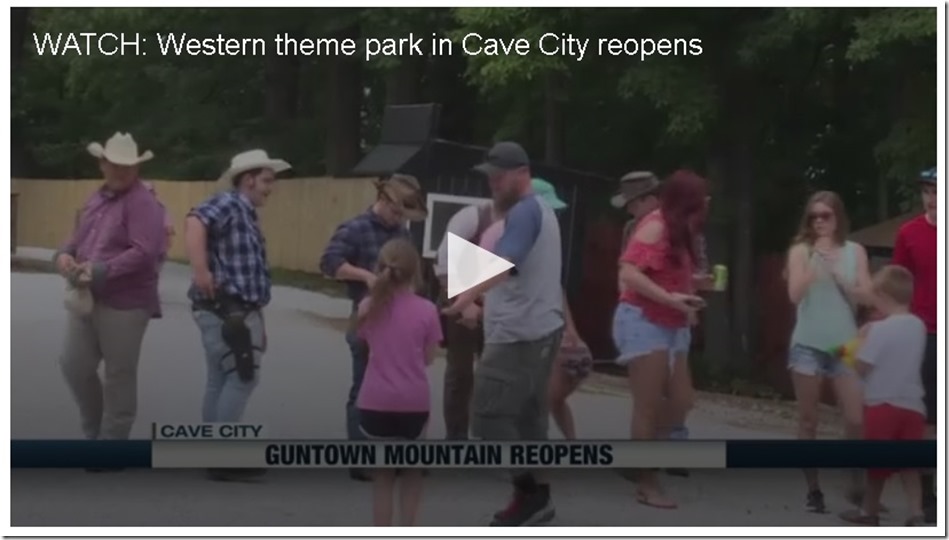 CAVE CITY, Ky. (WBKO) — It’s a revival of what some say was one of Cave City’s key attractions — Guntown Mountain.

“I’ve got more than a lifetime full of memories,” said Michael Minor, whose father was a gunshow stuntman for the park for decades.

On a mountaintop off of I-65, sits the relic of a park, once closed but now, finally open to the public again.

“Just a lot of fun. I think that’s what it’s here for. A lot of history,” said co-owner Vikki Froggett, who acquired the property with her husband in 2016. “A lot of people getting back together that hadn’t seen each other for years.”

The park originally opened in the 1960’s, and experienced a lot since then; things like ownership changes, vandalism, and now further redevelopment and reconstruction over the last three months.

“You wouldn’t believe the amount of work,” said Froggett. “We’ve had family and friends that have just pitched into help, and it’s just been great.”

Some there on its reopening day were returning to the memories of their childhood. Along with being a part of the featured gun shows, Minor’s father helped build parts of the park, working alongside other family members as well.

“To me its phenomenal that what’s standing is still up,” Minor said. “But it’ll never be the same, but it’s always good that it’s still here.”

Neal Rayburn said his grandfather held co-ownership of the park in the past, during a time when Rayburn was a regular member of the stunt show team.

“They called me last week and asked me to help this weekend to get it started doing it again,” Rayburn said. “So I dusted off the old gear out of the closet and got my guns and hats and came running.”

Now more memories can be made as the park puts itself back on the map.

“I’ve kinda fell in love with the property. And it feels like home now,” said Froggett. “And I think a lot of people feel like it’s theirs as well. So we just want to share and enjoy it.”

To find more information and updates on the park, you can check out their Facebook page.

Below are some youtube videos of Guntown Mountain – Enjoy!

CAVE CITY — Police were called to Funtown Mountain on Thursday, after responding to two separate calls there Wednesday.

The police received a 911 call around 11 a.m. Thursday regarding a disturbance.

“When we arrived there wasn’t one,” said Police Chief Jeff Wright. “Everything seemed to be normal.”

All three calls were regarding Will Russell, owner of Funtown Mountain, who was allegedly damaging property in the attraction’s gift shop.

Russell spoke to media on Thursday as he sat in a red, white and blue lawn chair in front of the gift shop.

He told members of the media from the Glasgow Daily Times and WDRB – a television news station in Louisville – he had been detained most of the week in handcuffs.

He indicated he sustained injuries when he was arrested last weekend during The Lebowski Fest in Louisville.

Russell was charged with possession of marijuana, menacing and resisting arrest Saturday. He was arrested at Executive Strike & Spare, a bowling alley where the fest was celebrated, the Daily Times previously reported.

On Thursday, Russell said he broke 19 years of sobriety during the weekend event when he accepted a beer from someone in the parking lot of the bowling alley.

When asked if he was smoking marijuana, Russell said he didn’t know what the substance was.

“It was green and it smelled a little bit like cotton candy. It was probably bluegrass, you know Kentucky bluegrass or hemp or something like that,” he said. “There’s a lot of names for it.”

Russell said he suffers from a bipolar condition and is taking medication. He also told reporters he was under the care of a psychiatrist and had been seeing the same physician for 20 years.

He said he had been hospitalized last year.

“I was given electric shock therapy. I have no short-term memory,” he said. “It’s been fine. I’ve got a lot of people to help me keep track of things.”

On Wednesday, after the second time police were summoned to Funtown Mountain, Russell was taken to a facility in Bowling Green.

Russell wrote about the incident on his personal Facebook page, and talked about it on Thursday with reporters.

“They interviewed me. They determined I was not a threat to myself or anyone else,” he said. “So, they let me go.”

Russell said he was dropped off at the White Squirrel Brewery in Bowling Green, where he was given a free hot dog and French fries, before being sent on his way.

LOUISVILLE, KY (WAVE) – A family fun park has closed following the arrest of its founder.

The roadside attraction’s facebook page said activities at Funtown Mountain were canceled as of Wednesday, July 15.

Funtown Mountain founder Will Russell was arrested on July 11 and charged with possession of marijuana and resisting arrest.
In addition to the park, Russell founded Louisville’s Lebwoski Fest and the WHY Louisville store.
No further details on the fate of Funtown Mountain have been released.

A Louisville man who wants to purchase a Cave City attraction received a $250,000 loan from the state Tuesday.

Will Russell, proprietor of WHY Louisville and founder of Lebowski Fest, was the applicant contact for the loan, according to the application obtained by the Daily News. Russell, who intends to turn Guntown Mountain into Funtown Mountain, said he was not present at Tuesday’s meeting.

It is a 15-year loan at 6 percent, said Gil Lawson, executive director of the office of communications at the KTDFA. “The loan does not go through until after they close on the property,” Lawson said.

Russell said the closing date is set for March 31.

Representatives from Land of Tomorrow Productions presented the proposal for Funtown Mountain to the KTDFA, of which four of the board’s seven members were present. The board went into closed session to discuss confidential financial information, Lawson said. Three of the four members voted – the chairman does not vote unless there is a tie.

All financial information, including source of equity, was redacted from the application. Certain amounts in inventory valuation from WHY Louisville Inc. and equity against a house in Louisville are listed on the application as collateral offered for the project.

The market value of the property before liens was established Jan. 27 as $1 million, according to the application. Guntown Mountain includes more than a dozen buildings on 28 acres.

The proposed timeline of the project begins with a groundbreaking April 1 and a gradual opening of other operations between June and the end of the year, including a gift shop, cafe, Haunted Hotel, putt-putt, saloon, museum and road completion according to the application. A grand opening is proposed for June 1, 2016.

Upon closing, “Land of Tomorrow Productions LLC will be the names lessee on the existing lease to the 28 acres divided in three tracts until 2049,” according to the application. The lease is still under negotiation, and “intended agreement may involve a sublease for Hillbilly Tea Shack in the space next to the gift shop with 5-10 year term with a revenue sharing with Land of Tomorrow Productions,” according to the application.

Tourco Inc. is the current licensee of Guntown Mountain. JB Enterprises of Cave City owns all 100 shares of stock of Tourco Inc.

Russell’s plans for the longtime roadside attraction include a new zipline and a new sound system and lights in the Lucky Lady Saloon. Russell also wants to turn the Opera House into a theater with hologram capabilities that would allow him to project performances of musicians, comedians and actors onto the stage. Russell has plans for a pop culture museum on the property that would include a prop from the film “Big Trouble in Little China” and a wax figure wearing Col. Harland Sanders’ trademark white suit.

“The missions of Funtown Mountain are to bring jobs and commerce to Cave City, elevate the reputation of Kentucky and offer affordable amusements for families,” according to the application.

Other than WHY Louisville and Lebowski Fest, Russell has attempted other attraction events. Pee Wee Over Louisville, founded in 2012, was meant to be an event that celebrated the Paul Reubens character Pee-Wee Herman. The event was canceled and was never affiliated with Reubens, according to the event’s Facebook page, which has 4,056 Likes. An article on Today.com and in The Courier-Journal in 2013 that was linked from the Facebook page states that Russell received a cease and desist letter from Reubens requesting that the event be canceled. 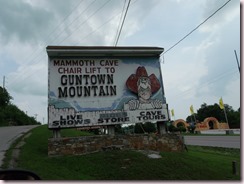 Will Russell, the man behind Why Louisville souvenir shops and the Lebowski Fest, has a new project.

“Roadside attractions to me are the heart of the American entrepreneur,” Russell said.

He will be trading in the G in Guntown Mountain for an F. “Funtown Mountain is basically a Kentucky carnival-themed, amusement, family entertainment center,” he said, adding that “once it’s in full swing, it’s going to be a daily attraction. People will travel. We’ll have special events, concerts, festivals.”

Russell said Funtown Mountain will bring commerce, jobs and good publicity to Cave City, which is the home of Mammoth Cave National Park, and Russell expects Funtown Mountain to open by summer 2016, the story said.